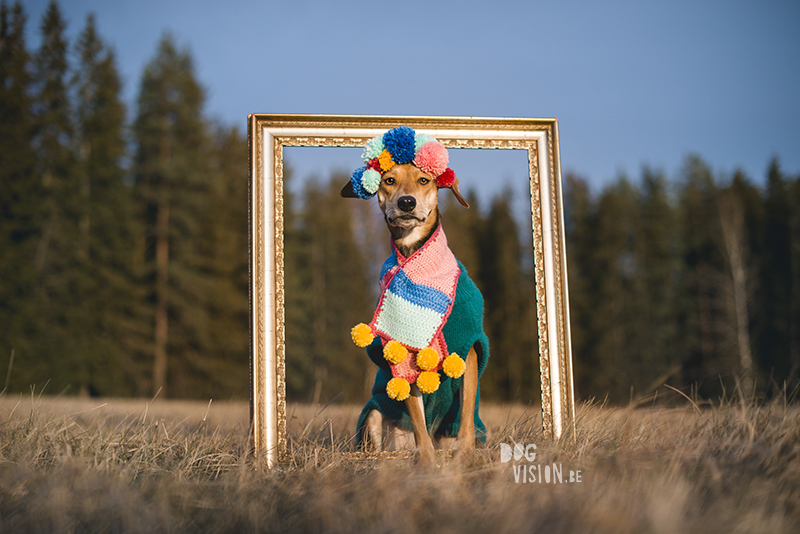 First and foremost: Hip Hip Hooray! Because Lizzie celebrated her 2nd birthday on Monday (20/01)! Or a bit of a party, because things didn’t work out as we planned… 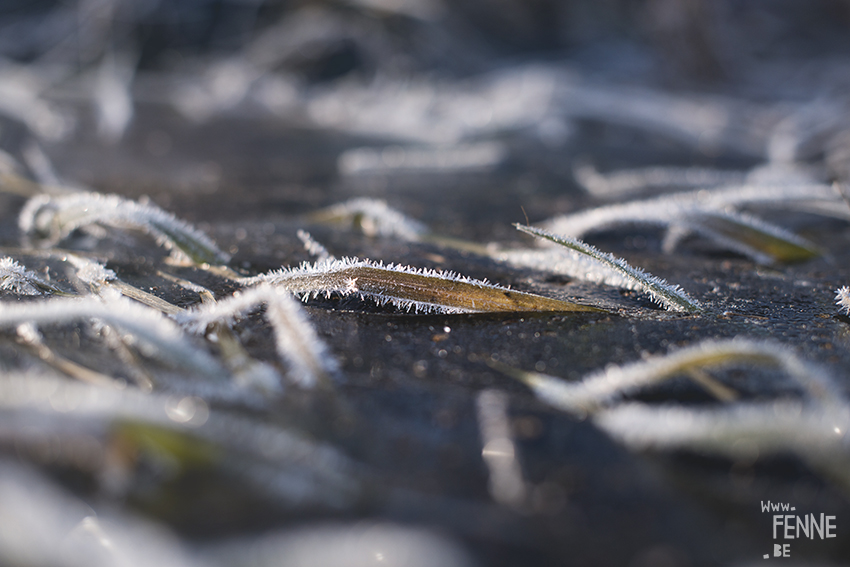 Our week started in a pleasant way with our daily walk, calm weather and making plans for Lizzie’s birthday weekend. Because, why would you only celebrate 1 day if you can have 3 festive days in a row? Then there was that first strange discovery: a tick on Lizzie. Huh? In January? A tick? We don’t normally see those before May.

A new jacket that we ordered weeks ago for her birthday was still not delivered which is weird. And then on Friday, during a normal walk, Liz suddenly started to scream like crazy. She limped right back to us, didn’t want to stand on her leg and was shaking like an aspen leaf. I held her for a moment until she was quiet and then checked the sore leg, but that seemed better again pretty quickly. She wanted to continue, I saw. And then, while she was a little ahead of me, still dejected but on 4 legs, I suddenly saw a large red spot a bit to the left below her tail. It was hard to see what it was. It barely bled but was swollen and it was clearly painful.

In Belgium, I would just go to the vet for a quick checkup? Not here. Normally you first have to call for an appointment so that they know you’re coming. I regularly skip this part because you first have to enter numbers while listening to a tape which is hard to understand, then you have a lot of hassle on the phone when they finally call back and you still have to drive there and have to pay for an emergency consultation. (the same day is always “emergency consultation”). My idea is that if we still have to pay for emergency, I might as well turn up because if you are there they will help you in one way or another. Anyway, we have insurance so Joeri tried for the first time “firstvet” an app where you make an appointment and (fairly quickly I admit) get a video call with a veterinarian. That vet then gives advice, possibly looks for a location, etc but cannot prescribe medication or something. By the time Joeri had made the appointment, Lizzie was already wearing a cone, the wound had been cleaned out, I had clean blankets ready and had my shoes on and her passport was in my handbag, just like 2 apples and a piece of chocolate. So that conversation took place in the car halfway to the vet haha. Due to the ‘convenient’ opening hours on a Friday afternoon, we had to drive all the way to Falun (more than an hour’s drive). The firstvet DA had called the clinic closer, but they had no time and would soon close, she said. Sweden will never become world-famous for outstanding customer service. We are already quite familiar with Falun. They are well equipped and know their procedures. I trust that my dogs will receive good treatment. But just like every other veterinary clinic in Sweden, they work with the annoying system of assistants that make me turn purple and green.

This is how it works: After registering for which you have to take a ticket even though there are no other waiting people do that you’re in the waiting room. Moments later they call you with the dog’s name. “Lizzie!” – yup, that’s us! We go through the large door to the treatment rooms and stop at the scales. While we weigh Lizzie, the assistant checks her chip number and we are led to the treatment room. We tell the assistant what had happened. She makes a few notes and then leaves with the message that the veterinarian will soon come to see us. We are sitting there alone in that room for a while. Then the vet comes to have a look, checks her leg, the wound, listens to her heart, takes a quick look at her teeth and advises to clean the wound well but to let it heal without stitches. Great news, because of course are never waiting for an anesthetic. The veterinarian then disappears, the assistant returns, shaves the hairs around the wound and cleans everything out. Then she too leaves again to come back a minute later with the vet so that he can approve her work. When all the advice has been discussed, we can go back to the waiting room where we can’t pay immediately but where we wait for all the reports to be typed and they call us.

With this system, we once spent the full SIX hours with Ravasz at the vet for a blood test and echo… So for all non-urgent matters or things for which I would rather talk to a person than a robot, we still visit our vet in Belgium. It is certainly not that they are ignorant or unfriendly here, but they are careful, covered, structured so that everything feels impersonal. Even though we have been there several times, if we fail to give the right person-number with the right dog, they have no way to identify us. (every person has a number but sometimes Joeri goes to the vet, sometimes it’s me and most dogs are on my number but insurance is on Joeri’s, but then they can still only have the medicins on my number.) 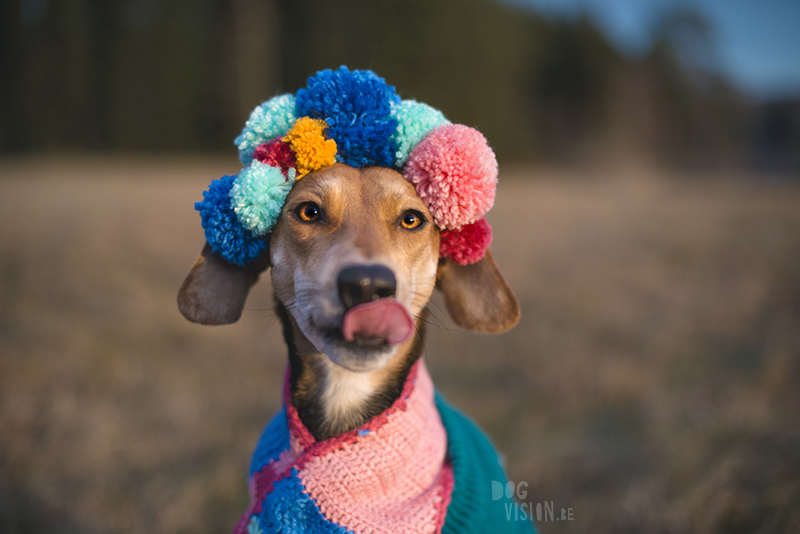 So the weekend went totally different than we hoped. Instead of a long walk, we were mostly at home with Lizzie and took turns taking a walk with Mogwai and Oona. Fortunately for Lizzie, that wound did not affect her appetite because Joeri baked delicious smelling peanut butter cookies! The whole house smelled like party and joy :-). From the moment Joeri was mixing dough, Oona and Lizzie were running around and oo-oooh those eyes when they were allowed to taste the first cookies !! 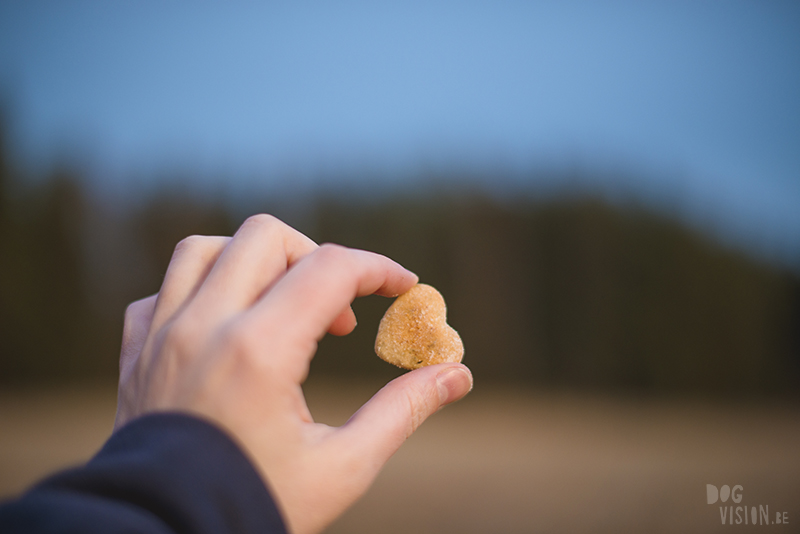 Because I am fairly useless in the kitchen, I devoted myself to another project: a birthday shoot for Lizzie. I really wanted to make a crown. I first thought with flowers, but come on, flowers here in the north in the winter, isn’t that a bit absurd? But I wanted color. Sooo …. pompoms! Yes, that should work. I found a manual on youtube and Oona was the volunteer for fitting (because I wanted to let Lizzie rest). Of course, I didn’t think about the fact that Oona’s head is almost twice as large. So it has become a giant crown haha.

But a crown alone, wouldn’t that get lost in a photo? I thought it would not work visually, so on Sunday, I decided to crochet a little scarf – with skills that had not been updated since the early 90s … We are now Tuesday and I still have a bad thumb but it is me managed to make something scarfy, hurray!

Together with Lizzie, I made a walk through the fields with a frame on my shoulders and pink pom poms in my hand *pom-pom-pidom* (we sing) past the neighbors. Not only the peanut butter cookies but also all the time with me was a party for her. She was so cheerful and exuberant, did 101 tricks even though she didn’t have to and walked around with her nose in the air and the wind in her ears. Great to see her like that. Certainly when I look back to our first meeting a year and a half ago where a small ball of misery barely dared to get off the pillow. She will probably never become a hero, but with some support, she is so happy to explore the world. And she has spunk. She knows what she wants and knows how to communicate that. She runs faster than the wind, chats, and flies over the fields or jumps on top of me when I do yoga and then in the evening, every evening, she gently crawls against me, rolls herself into a little ball, sighs deeply and falls asleep.

Sometimes we have to be strict and set limits to those eager eyes and that happy tail, but I think she understands that. I especially hope that I will never disappoint her. She is really such a sweetheart. Above all, let’s add a lot of those energetic and colorful years 🙂 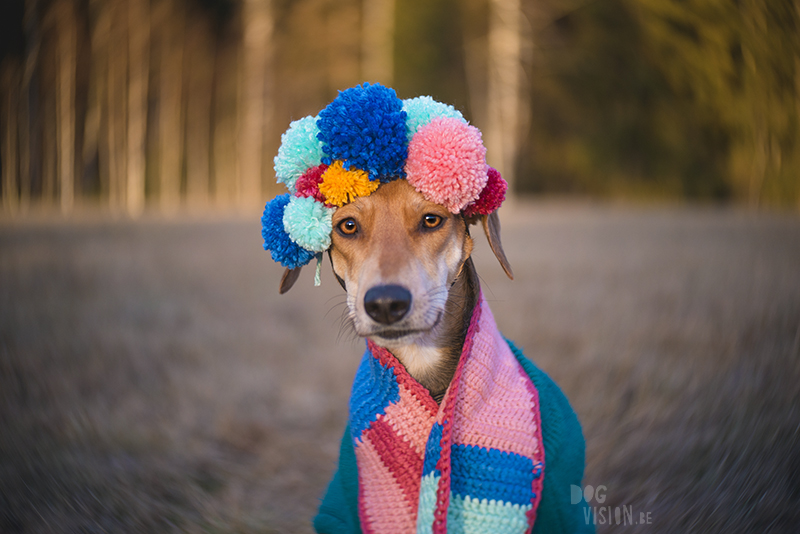 For those who are curious about the light here in Sweden.

– that has been more than an hour extra light since Christmas. That seriously feels like spring. Last week we went up to +9C, which is closer to the average temperature of Midsommar than what a winter should be here. Normally we go at least -25C a few days but it hasn’t been freezing for weeks. At the moment, several lakes have almost completely melted, while it should now be thick enough to hold a car. Many of the roads also look terrible. Many Belgians think that driving on snow is the creepiest thing of winter here, but this is more difficult because due to the moisture a lot is shifting, we get wells and bumps and we tour through a melted landscape with dubbdäck and winter tires. 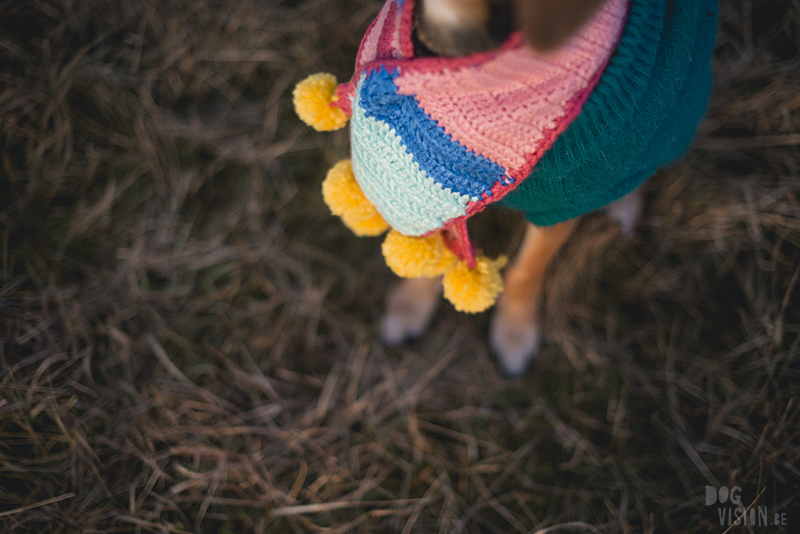