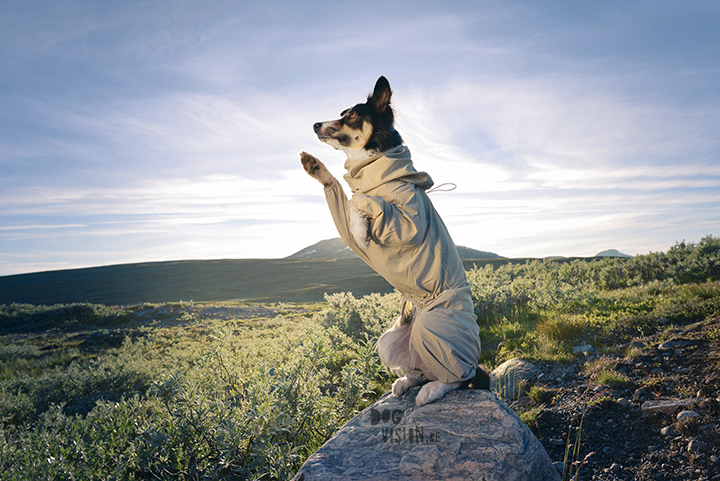 With a summer road trip planned to the northern parts of Scandinavia and Lapland, I was very excited to see that Hurtta was looking for testers for a new product: a Sun & Bug blocker.
Scandinavia is absolutely stunning and the freedom to roam makes it a wonderful destination with dogs but it also means: hungry mosquitoes and other bold bothersome bugs. Not all places are as terrible but in general there are more pesky zoomers than what I was used to in Belgium and of course when camping you’re exposed most of the time because almost everything is outside except from sleeping or hiding from the rain.
It’s not unusual to have conversations while waving arms and legs in all directions, slapping yourself or suddenly scream “hurray I got one!” Yes, the little glorious triumphs of Scandinavian outdoor life 🙂 Both Mogwai and Ravasz tried on this lightweight coat as they got the most mosquito bites but it was Ravasz who got to wear it the rest of the summer because I noticed the biggest advantage for him. Although he’s very hesitant to anything around his body, he had no problem wearing this (and since this winter up north also his winter coat). He could just walk, snooze and run like he wasn’t wearing anything but now he wasn’t that itchy or annoyed anymore and only got a few bites on his belly.
Even back home, he always wore it when we went out in the forest for a walk or picking mushrooms and berries. Now both the sun as well as the bugs are back up north, we found an extra and unexpected reason to get the coat back out too. At the end of last summer, Ravasz was diagnosed with cancer. He had a lump on his back that appeared very suddenly and grew fast. He got surgery to remove it and sadly they couldn’t save his tail but of course his recovery was much more important. All wounds healed perfectly but he has of course a big scar on his back that needs a bit of protection. The protection from the bugs, which was our main reason to be so interested, worked very well for him, but now we can also protect his back and the scar from damage by the sun. PS: Because many people ask me about Ravasz and his health: For now he’s doing just fine. He still gets chemotherapy to suppress the cancer in his bone marrow and he will need to take this for the rest of his life. We have his blood tested every 2 months with a specialist who checks if the therapy still works and how his general immune system is doing. At age 12 he’s getting a bit slower but he’s a happy and carefree dog and doesn’t have pain or discomforts in any way.